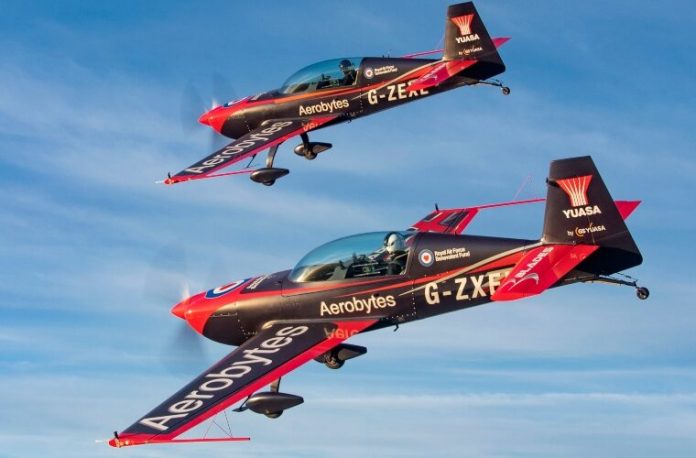 World famous aerobatic team The Blades have completed a special mission for their key sponsor Yuasa.

The four-ship team, piloted by former Red Arrows, drew the Japanese battery manufacturer’s distinctive logo in the skies above their Sywell Aerodrome base as part of a one-off flying display.

After being set the challenge by Yuasa, the team used their experience and professionalism through briefings and test flights to perfect the manoeuvre.

A split with smoke trails that filled the sky with an enormous representation of Yuasa’s iconic red and white Y logo.

The entire story can be watched on a documentary style video which has been released on GS Yuasa’s social media.

Yuasa, a brand of global battery manufacturer GS Yuasa, took their sponsorship programme to new heights by teaming up with The Blades for 2022.

Flown by a team of former top Red Arrows pilots, their award-winning displays feature over 30 high G manoeuvres, some of which involve flying as close as four feet apart and they perform exhilarating close formation aerobatic displays to well over four million people at events throughout the year.

As well as these spectacular appearances, The Blades is the world’s only aerobatic airline, which means they fly passengers in formation and through a host of aerobatic moves.

They also regularly feature on television programmes and in media articles.

Andy Evans, leader of The Blades said: “We’ve absolutely loved doing this for Yuasa as we are never ones to shy away from a challenge.

“There are a lot of aspects we needed to get right such as angles in smoke, spacing and the general shape in the sky.

“We now just need to go away and have a look at the video to see if we need to perfect anything going forward.”

James Douglas, European group marketing manager for GS Yuasa Battery Europe Ltd said: “Yuasa are the market leading battery brand for car, motorcycle, vehicle, industrial and a whole host of other applications so our red and white logo is well known both within the industry and amongst consumers and seen as mark of quality, performance and reliability.”

“It’s based on a letter Y, and represents energy, development and the dynamic business activity that we’ve been involved in since our founding in Japan over 100 years ago.”

Yuasa is also running an exclusive competition to win a pair of tickets for a flight experience with The Blades which closes on 4 September and can be entered on GS Yuasa’s social channels @GSYuasaUK.