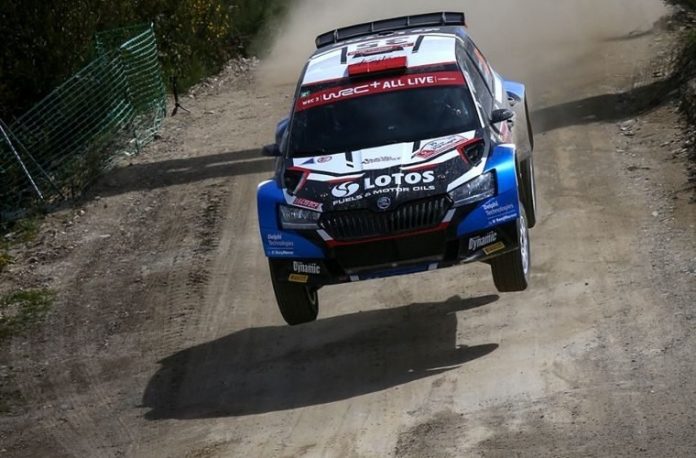 Delphi Technologies is fast becoming a familiar sight on the podium after its brand ambassador Kajetan Kajetanowicz won the WRC3 category at the Vodafone Rally de Portugal.

Fresh from their awesome drive in Croatia, Kajetanowicz and co-driver Maciej Szczepaniak were soon back on the pace at the Matosinhos-based event and a committed drive saw the pairing close a gap of 25 seconds that the leaders had pulled out over the first few stages.

From here, there was no slowing Kajetanowicz and on the second day he took the category lead from Yohan Rossel. Later in the day though, the two rivals swapped places once again as Kajetanowicz spun the LOTOS Rally Team Skoda Fabia Rally2 Evo during the Amarante speed test.

The mistake saw him lose over 23 seconds to Rossel going into the final day, but once again he closed the gap after setting the fastest pace on three of the five stages.

When the dust had settled, and after one of his most impressive drives ever, Kajetanowicz nudged out his rival to take the category win by only five seconds.

The win was even more amazing as it marked the Polish driver’s debut on Europe’s westernmost WRC round. His victory takes Kajetanowicz to second in the points as he looks to complete a WRC3 hat-trick at the Rally Italia Sardegna, which starts on 3rd June.

Kajetanowicz has been sponsored by Delphi Technologies since 2017 and in the same year became the first-ever competitor to achieve three back-to-back European Rally Championship (ERC) titles, cementing his position as one of Europe’s best rally drivers.