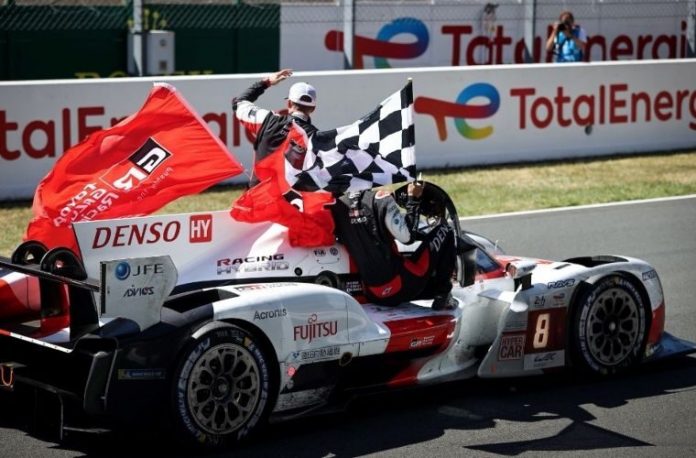 In the 90th Le Mans 24 Hours, TOYOTA GAZOO Racing took first and second to extend its winning run to five at the legendary Circuit de la Sarthe, with the leading DENSO sponsored GR010 HYBRID, completing 380 laps to take the chequered flag and the second crossing the line just 2mins 1.222secs behind.

A first win for Ryo, in his third Le Mans and his first with TOYOTA GAZOO Racing, makes him the fifth Japanese driver to stand in the centre of the podium.

The two DENSO sponsored GR010 HYBRID Hypercars were the class of the field and engaged in a close battle at the front, with the lead changing hands several times as the race ebbed and flowed, with traffic, slow zones and track evolution all coming into play.

That contest continued for 16 hours and during most of that period the two cars were running just a few seconds apart, but the complexion of the race changed decisively on lap 256 when José pulled the race-leading #7 car to the side of the track following an issue relating to the front motor.

However, José performed a system reset and was able to return to the pits, where further resets solved the issue and allowed the #7 car to continue at normal racing speed, albeit nearly a lap behind the new leader, Brendon in the #8 GR010 HYBRID.

Despite José setting the fastest lap of the race within the last half hour, with such closely-matched performance, that deficit proved too great for the #7 crew to overcome, so it was Brendon who had the honour of taking the chequered flag to win the 90th Le Mans 24 Hours.

The result earned double points towards the 2022 FIA World Endurance Championship, which puts TOYOTA GAZOO Racing on top of the manufacturers’ standings after three races, 22 points ahead of Alpine, but the fight for World Championship honours will continue in just four weeks at the 6 Hours of Monza on 10th July.

“This amazing triumph is an incredible achievement for TOYOTA GAZOO Racing and we are proud to be associated with the team, its drivers and these astonishing, high-performance machines,” said DENSO Europe, Pan European strategic marketing manager, Fatiha Laauich.

“As a leading original equipment manufacturer, supplying vehicle manufacturers globally, DENSO has a reputation for producing components and systems of the highest quality and reliability.

“Many of these products are available through DENSO Aftermarket, the company’s route to market for the independent service and repair sector.”