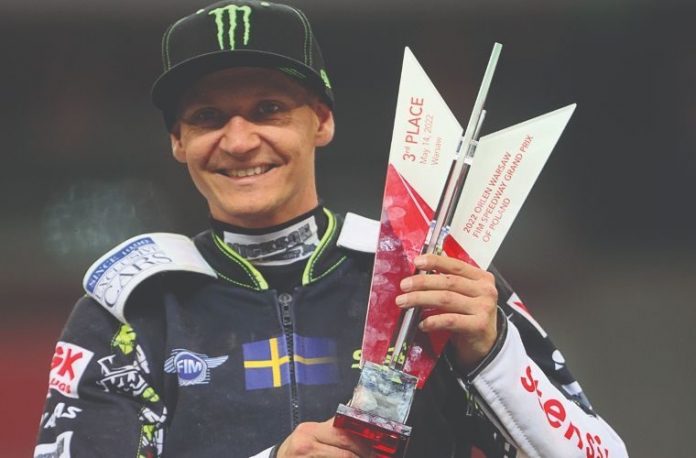 The NGK-sponsored Swede came third behind SGP winner Max Fricke and runner-up Leon Madsen in front of 50,000 fans in Warsaw, scoring sixteen championship points as the series heads to the Czech Republic.

He said: “I really needed a decent result in Warsaw to bounce back and climb the ladder in the championship table.

“I am really happy with third tonight.

“It was a really tough night for me.

“I had some really bad luck – I snapped a chain and crashed in one heat. I was fighting in every heat for every point and I got a bit lucky in the semi-final, to be honest.

“I was in the final to get on the podium, and that’s the way it is sometimes.”

Lindgren now sits in fifth place in the World standings on twenty-four points, six in front of NGK stablemate Robert Lambert, who scored eight points in Poland, and ten in front of triple World Champion Tai Woffinden who scored ten points and made the semi-final in Warsaw where Dan Bewley scored three points.

John Money, who handles Speedway sponsorship on behalf of NGK Spark Plugs (UK) Ltd, said: “It was an impressive performance by Freddie who I’m sure will have gained a lot of confidence by making the podium, while Tai and Robert also achieved good points at what is one of the showpiece Grand Prix of the season.”

Next up is the Prague FIM Speedway GP of Czech Republic – Prague on Saturday, May 28th. The highly-anticipated Marketa Stadium weekend also features the first-ever SGP2 round – the revamped FIM Speedway Under-21 World Championship on Friday, May 27th.