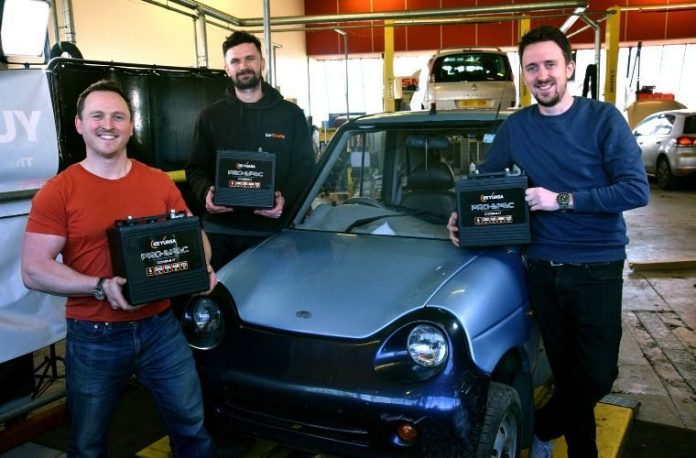 Global battery manufacturer, GS Yuas has partnered with popular automotive YouTube channel Car Throttle to support the overhaul of a REVA G-Wiz by suppling and helping to fit eight Pro Spec batteries to return the iconic EV back to the road.

With over 3m YouTube subscribers, Car Throttle presenters Alex, Jack and Ethan are followed by automotive enthusiasts around the world.

Widely known for their love of all things automotive, the channel has built a reputation as a petrolhead paradise.

Their latest project, the G-Wiz was produced between 2001 and 2012 and is a much-maligned car from the early days of electric vehicles.

Although now rising in popularity, the G-Wiz remains attainable, making it the perfect foray into electric vehicles for the trio.

Whether fairly or not, the G-Wiz was voted the worst car ever by Auto Express readers and is an early example of the increasingly popular electric vehicles to hit the UK’s roads.

Although iconic, the Indian-built EV remains divisive amongst petrolheads.

Representatives from the battery manufacturer were on hand to support Alex, Jack and Ethan with the overhaul, including the installation of eight GS Yuasa Pro Spec batteries, resulting in the all-electric G-Wiz hitting the road for the first time in over ten years.

Built with state-of-the-art plate separator technologies to minimise self-discharge and maximise the number of recharge cycles.

Gareth Robinson-Green, marketing executive at GS Yuasa Battery Sales UK Ltd said: “We absolutely love Car Throttle so were understandably excited to be able to support them as they bring one of the UK’s most unloved cars back to the road with Alex, Jack and Ethan.

“Our Pro Spec DCB125-ET batteries are the perfect solution for the G-Wiz, restoring its 50-mile range and providing a power increase of 20 per cent over those fitted by REVA.

“We know the Car Throttle team have a whole host of exciting plans for the G-Wiz and we’re very much looking forward to seeing them hit the channel.”

Alex Kersten, frontman of the Car Throttle YouTube channel said: “Huge thanks must go to the team at GS Yuasa who came to the aid of our much-depleted G-Wiz.

“Stocked up with eight GS Yuasa Pro Spec batteries, their expertise helped get the G-Wiz moving for the first time in ten years.

“Good things are coming for the world’s most misunderstood EV and it wouldn’t have been possible without these guys.”