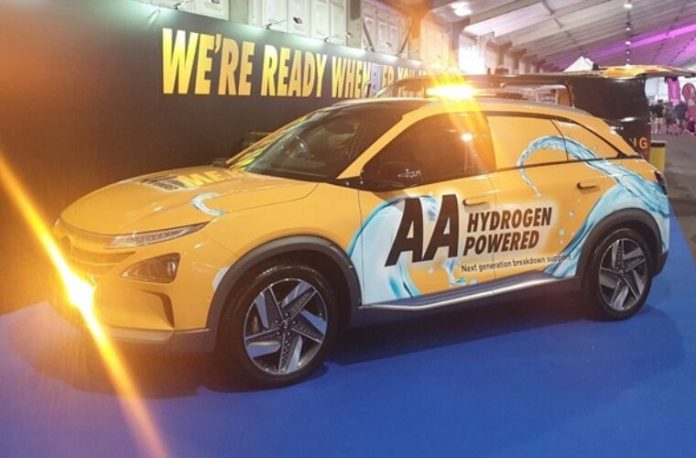 The AA has unveiled a new hydrogen fuel cell breakdown vehicle at the British Motor show in Farnborough.

Unlike conventional internal combustion engine vehicles, these vehicles produce no harmful tailpipe emissions – the only emissions are water.

The AA designed the NEXO to be an operational roadside breakdown vehicle which will carry most of the tools, equipment, and spares that you would find on the rest of its yellow patrol fleet.

It will be targeted at breakdown jobs in ultra-low emission areas that require fixes rather than tows.

The SUV type vehicle has a fuel cell system combines oxygen and hydrogen to create a flow of electrons that powers the electric drive motor and charges the 1.56kWh high voltage battery.

The NEXO can fuel up in just five minutes and has an impressive range of 414 miles (WLTP) which is more than enough for city work and potentially can handle many of the 10,000 daily breakdowns attended by the UK’s leading breakdown provider.

“At the AA we are investing in electric vehicles but believe that there will be a role for hydrogen and possible synthetic fuels in the future, especially for business fleets.

“We want Patrols to pilot this hydrogen fuel cell vehicle to see what lessons we can learn. We believe hydrogen might be used for our bigger tow trucks in the future.