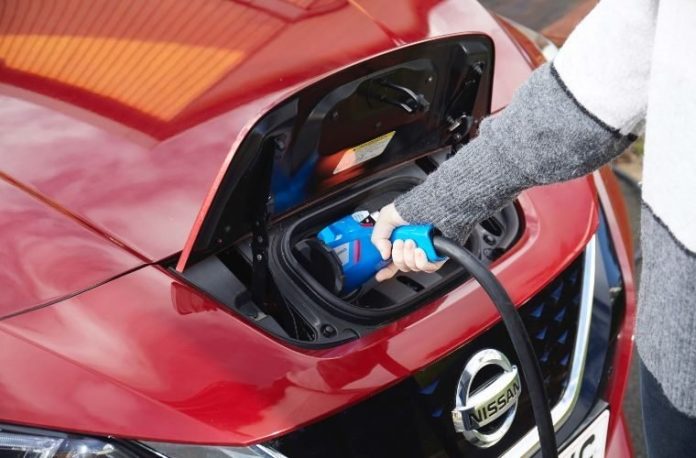 A nationwide network of electric vehicle (EV) batteries, which store electricity generated from renewable sources at non-peak times, could be used to feed power back into the grid at peak times, distribution network operator Western Power Distribution has said.

The firm has announced an ‘electric vehicle to grid’ (V2G) trial as part of its ‘electric nation’ project and is recruiting 100 Nissan EV owners in the Midlands, South West England and South Wales to take part.

Roger Hey, Western Power Distribution’s DSO systems and projects manager said: “One of the latest Nissan LEAFs with a 62 kWh battery would be able to put energy back into the grid that would be the equivalent of powering a house for days.

“Multiply this by millions of EVs across the UK and there is the potential for huge storage which can mitigate the peaks in electricity demand.

“And people could be rewarded for offering their EVs as a service to the grid.”

Currently, only Nissan EVs can be used for V2G charging due to their CHAdeMO technology.

The majority of EVs have the ‘CCS’ charging system, which is due to be V2G compatible by 2025.

From that point V2G should be possible for all EVs.

In the meantime WPD is involved in a range of innovation projects to explore other ways of ensuring there is sufficient capacity in the electricity network for the increasing numbers of EVs well ahead of time.

Currently serving around nine million customers, the network operator predicts that there may be up to three million electric vehicles in its area by 2030, with 217,000 chargers connected to the network by 2023.

The Electric Nation Vehicle to Grid project is offering the free installation of V2G smart chargers worth £5,500 to Nissan EV drivers who live in the Midlands, South West and South Wales.

The trial provided data from more than two million hours of car charging, revealing the user habits on timings of charge, where and for how long, as well as the impact of different tariffs.

By plugging in at specified times and putting energy back into the grid, active participants of the Electric Nation Vehicle to Grid project are expected to earn a minimum reward up to the monetary value of £120, available over the one-year trial period from March 2021 to March 2022.