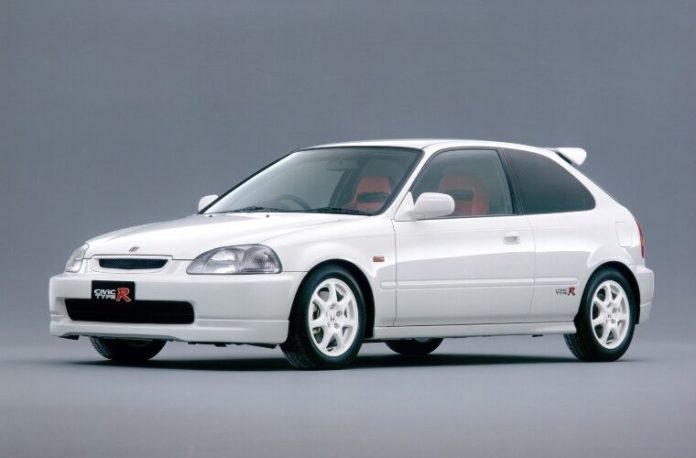 Honda’s iconic Civic is celebrating two anniversaries this year: 50 years of continuous production and 25 years of the high-performance, race-derived Type R variant, which rewrote the rulebook on what a hot hatch should be.

Despite being born as the more attainable Type R, the Civic variants embody the Type R philosophy the maximum thanks to exquisite engineering and engaging dynamics.

Over six generations, the formula has evolved to deliver the ultimate front engine, front wheel drive performance hatchback to customers.

One that can comfortably handle the daily commute from Monday to Friday, before tackling the circuit at weekends.

The Type R nameplate can be traced back to the 1992 Honda NSX Type R, which raised the bar on performance and dynamic ability, but was only available in extremely limited numbers.

Applying the Type R philosophy to the Civic followed a similar engineering ethic to the Integra and NSX to offer an engaging, rewarding drive.

The EK9 was offered to the Japanese market only and had a high-end specification; including a hand-ported 1.6-liter DOHC VTEC engine that produced a highly impressive 116bhp-per—litre, a lightweight seam-welded shell that contributed to a total vehicle weight of just 1050kg, paired with a helical Limited Slip Differential (LSD), and unique suspension components to completely transform the driving experience.

Launched to outstanding reviews, the EK9 set in motion the pursuit of the ultimate front-engine, front wheel drive performance hatchback.

As a result of the overwhelming success of the first-generation car, the second-generation was offered across Europe; thanks, in part, to now being manufactured in the United Kingdom.

The new car introduced an all-new, and now iconic 2.0-liter DOHC i-VTEC ‘K’ series engine that redefined what a normally aspirated two-litre engine could do.

It too featured uprated brakes, a precise, close-ratio six-speed transmission and a shell that made extensive use of high-tensile steel to increase torsional static rigidity by 80% over the EK9.

The third generation Civic Type R was unique in that the European and Japanese models differed dramatically.

Europe received the FN2-based hatchback, which retained the proven 2.0-liter engine, but introduced a new chassis that moved the fuel tank beneath the front seats to improve interior space and flexibility. Japanese customers were instead offered the FD2 saloon, which offered an even more focused driving experience thanks to additional items such as a more powerful K20A engine, a helical LSD and powerful Brembo brakes.

The saloon’s increased weight was countered by extensive use of structural adhesives instead of welding, and aluminium in both the chassis and panels.

As market and regulatory expectations shifted, the move toward turbocharging was inevitable.

Honda engineers worked meticulously to develop the K20C1 turbocharged 2.0-liter engine that offered explosive performance thanks to a 310PS output.

The FK2 proved a formidable base for a competition car, winning several TCR Touring Car titles across the globe.

Arriving in 2017, the FK8 was the ultimate evolution of the Civic Type R.

A significant evolution of the FK2, the new car gained a host of new mechanical features such as adaptive dampers, and further revisions to the K20C1 engine to boost power to 320PS.

The model also introduced downforce to the equation for an even more intense drive; the external aerodynamic package worked in unison with an advanced, almost flat underfloor, to actively contribute to negative lift.

The model also made its debut in the United States, with the region leading global sales for the car.

Launching later this year, the all-new generation car further evolves, matures, and refines technologies that have been developed over several generations.

Whilst new technologies and refined aerodynamics have helped set the bar higher once again, a clear lineage can be traced back to the FD2 generation with the incremental revisions resulting in the fastest, most rewarding and addictive Civic Type R ever built.

Already the track record holder at Suzuka, the 2022 Civic Type R is a fitting way to celebrate 30 years of the Type R nameplate.