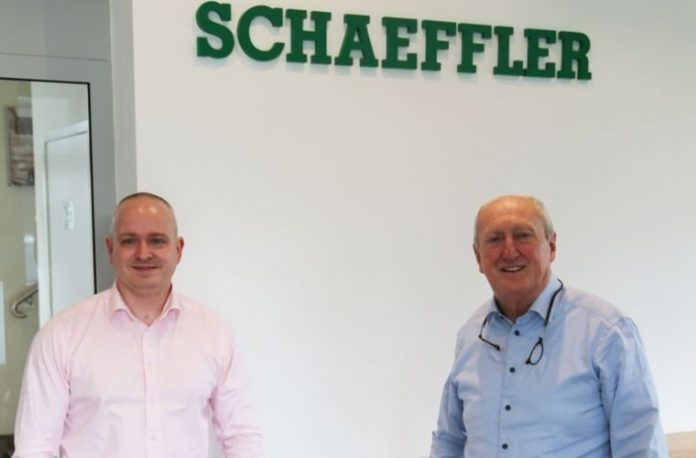 Schaeffler promotes from within to fill ‘rather large boots’

Nigel Morgan, managing director of Schaeffler’s Automotive Aftermarket division in the UK, has decided to step aside after more than 40 years continual service with the company.

Nigel’s rise to aftermarket fame began as a Sales Manager at Alan A Morgan, his family’s company based in the Midlands, which became the sole importer of LuK clutches back in the Eighties.

LuK liked what Alan A Morgan did so much it bought the company, which then went through several stages of evolution from LuK Aftermarket Service to the present day Schaeffler (UK) Ltd.

Nigel has presided over a phenomenal period of prosperity for the company in the UK, taking annual turnover from £3Mio to around £150Mio and successfully introducing the INA and FAG brands to join their LuK ‘big brother’.

They can also now boast a prominent position in the UK aftermarket, as the preferred brands of many distributors and, importantly, independent technicians.

Schaeffler’s success in the UK can be put down to its philosophy of providing technicians with complete repair solutions, with everything in one box and all in genuine original equipment (OE) quality.

As a trusted technical partner and supplier of components and systems to the world’s leading vehicle manufacturers, independent technicians soon built up their own trust and loyalty to the LuK, INA and FAG brands.

Providing them with free access to the Schaeffler REPXPERT workshop portal and loyalty programme is simply the icing on the cake for many mechanics.

In 2013, at the height of the UK horsemeat scandal, Nigel decided that more also needed to be done to educate the aftermarket about vehicle parts quality, giving installers an informed choice about the differences between OE and non-OE components.

Initial adverts from OESAA, the association chaired by Nigel since its conception, featured horse and cow images and triggered a vociferous response from some quarters.

Seven years later and the organisation is still going strong, recently adding new members such as Brembo and Motul, and still educating technicians at major events, including its own Autoinform Live training weekends held in partnership with Frank Massey.

Nigel will continue to be involved with OESAA, leading the campaign in a consultancy capacity after he leaves Schaeffler at the end of March, saying: “I firmly believe that technicians can benefit most from using the parts and services offered by genuine OE suppliers, which offer the best quality and technical backup available to the aftermarket.

“OE suppliers are simply the best placed to keep technicians up-to-date with new products, systems and repair methods, as they are supplying these high-tech products and systems to vehicle manufacturers for original fitment.

“OE suppliers will also continue to be a key source of education and information, as hybridisation and electrification slowly take hold, so there is still an important role for the OESAA campaign to play over the coming years – one which I hope to remain very much a part of.”

Nigel obviously leaves some ‘rather large boots’ to fill at Schaeffler, so stepping up to the newly created position of ‘Country Manager UK & Ireland’ will be Mark Dolloway, who joined Schaeffler from SKF in 2012.

Mark will, in turn, be replaced as Sales Director by Matt Selby, another Schaeffler veteran who originally joined the company back in 2007.

As always, the final word belongs to Nigel: “I have enjoyed over 40 wonderful years with Schaeffler, with any expectations I had at the start of this journey completely and utterly fulfilled beyond my wildest imagination.

“However, all of my achievements are also that of the amazing UK team, many of whom have been alongside me at Schaeffler for a very long time.

“Their hard work, dedication and passion means that I can leave Schaeffler (UK) Ltd knowing that it is in some very capable hands, but this is not a ‘goodbye’, merely an ‘auf wiedersehen’, as there is certainly a lot more for me to do.”

Information about Schaeffler components and systems, including fitting instructions, labour times and much more, can be found on the REPXPERT workshop portal at www.repxpert.co.uk or by using the REPXPERT app, which is available free for all iOS and Android devices from the relevant app store.