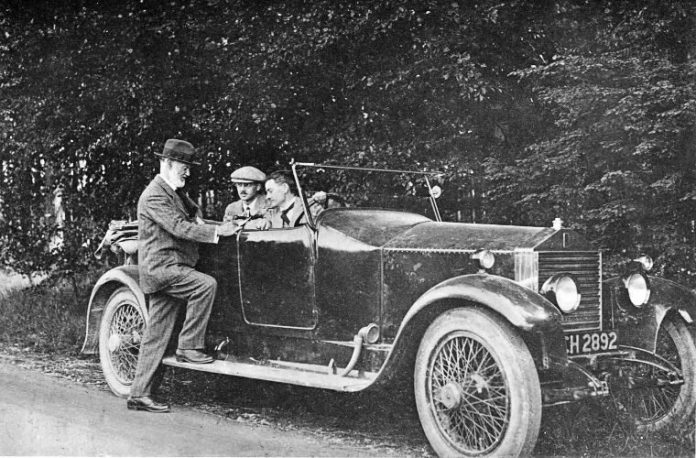 Major technological leap forward, set the template for Rolls-Royce engines and motor cars for the next three decades

Rolls-Royce Motor Cars is marking the centenary of the legendary 20 H.P, known to the world simply as the ‘Twenty’, launched on 6 October 1922.

Designed by Sir Henry Royce, it ranks among the most important and influential models ever produced by the marque.

As the first Rolls-Royce specifically intended for the owner-driver, rather than predominately for chauffeured use, it is a direct ancestor of today’s Ghost, Wraith, Dawn and Cullinan.

And in setting the mechanical template for generations of Rolls-Royce motor cars that followed it, the ‘Twenty’ also has historical parallels with the forthcoming Spectre.

On the strength of its near-silent engine, flawless reliability and mighty feats of endurance, this epochal motor car earned the title – which the marque has never since relinquished – of ‘the best car in the world’.

It also established a new ‘single-model’ policy in place of the company’s previous practice of offering several different models concurrently.

This proved a financially prudent strategy up to the outbreak of the Great War in 1914.

For the next four years, Rolls-Royce devoted itself to military projects, including an armoured version of the Silver Ghost and a series of magnificent aero engines.

But the end of hostilities in 1918 revealed an entirely new world, in which the pre-War socio-economic, political and cultural orders had been utterly transformed.

For Rolls-Royce, the shift from war footing to peacetime meant there was now huge excess capacity at its Derby works, which by 1919 employed some 8,000 workers.

Even before the Armistice in 1918, Henry Royce foresaw the need for a smaller car to counter a likely reduction in sales of the larger 40/50 H.P. chassis.

Visionary that he was, Royce anticipated – correctly – that many Rolls-Royce owners would find themselves unable to recruit, retain or afford the substantial domestic staff they had employed before the War.

The option of a motor car that required neither the laborious and costly weekly maintenance demanded by a Silver Ghost, nor a chauffeur to drive it, would, he reasoned, be an attractive proposition.

Two years later the company directors agreed with him.

In 1920, Royce transferred his engineering skills from ‘designing’ a smaller car to ‘manufacturing’ it.

This decision was underpinned both by the need to take up the remaining oversupply at the Derby factory, where the workforce had already been reduced to 2,000, and to supply a car that would be better suited to some customers’ post-war needs than the 40/50 H.P.

Royce instinctively understood that, despite their now more straitened circumstances, these owners were accustomed to Rolls-Royce standards of excellence and would expect nothing less from a new model, regardless of its size and specification.

The company therefore went to great lengths to reassure them about the proposed 20 H.P., stating that ‘under no circumstances would the standards of excellence maintained in their products be diminished’.

In September 1920, Royce confidently informed the Board he was satisfied ‘that the standard of excellence of production was maintained’.

Its straight-six cylinder, 3.1-litre engine was less than half the size of the Silver Ghost’s 7.5-litre unit.

However, the new model also weighed around 30% less than its larger sibling.

This, combined with other advances in engineering design since the Silver Ghost’s debut in 1906, meant the performance gap between them was narrower than the raw numbers might suggest.

Indeed, it was immediately obvious that the new 20 H.P., or simply the ‘Twenty’ as it quickly became known, represented a huge technical leap forward.

The lightness of its controls and the performance of its steering, braking and suspension systems made the Silver Ghost – though still superior to its direct competitors – seem rather outdated by comparison.

These qualities also rapidly established the ‘Twenty’ as a firm favourite among both established Rolls-Royce devotees and those new customers to whom a larger car of aging design did not appeal – especially where the purchase price and ongoing running costs were important considerations.