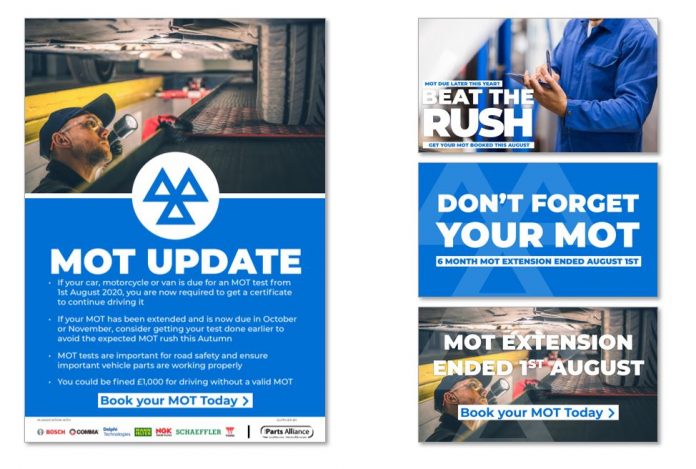 The aftermarket is working to make motorists aware of the sharp rise coming in MOT business after the emergency six month MOT exemption ended on 1st August.

The extension to MOTs due after 1st April was announced by the government on 25th March as one of the measures taken to reduce the rapid spread of COVID-19. Garages and the supply chain scaled back dramatically; work dried up and many garages needed to close or reduce hours, placing staff on furlough.

DVSA later reported test volumes were just 2.2 million in April and May, down 70% from the 7.2 million tests completed in the same months of 2019.

Many garages meanwhile shared ‘horror stories’ of unsafe brakes, worn out tyres and broken suspension components on cars exempted from MOT so the trade widely welcomed the announcement on 29th June that the MOT would be reinstated from 1st August.

The aftermarket is now busy ensuring motorists are aware they must have their MOT test completed as normal if it becomes due after 1st August.

Failure to have an MOT is serious. It can lead to fines of up to £2,500 if the car is found to be in a dangerous condition. It can also impact claims on insurance in the event of an accident.

Over and above this, the delayed tests from earlier in the year will need to be completed too. DVSA statistics illustrate the trade is set to swing from famine to feast meaning capacity to complete MOTs will be under severe pressure.

Demand is projected to reach normal levels again in September before exceeding it for the next four months, peaking at nearly double usual levels in November and December.

To ensure MOTs can be completed on time, DVSA is asking garages and motorists to book these delayed tests early wherever possible.

The Parts Alliance is also urging garages to be ‘MOT Ready’ to maximise their earning opportunities after a lean few months.

The business has produced digital banner artwork for garages to use online and through social media. Reception area posters can be displayed to remind motorists that MOTs are mandatory again, promoting a ‘book early’ message to avoid delays and inconvenience as the autumn rush emerges.