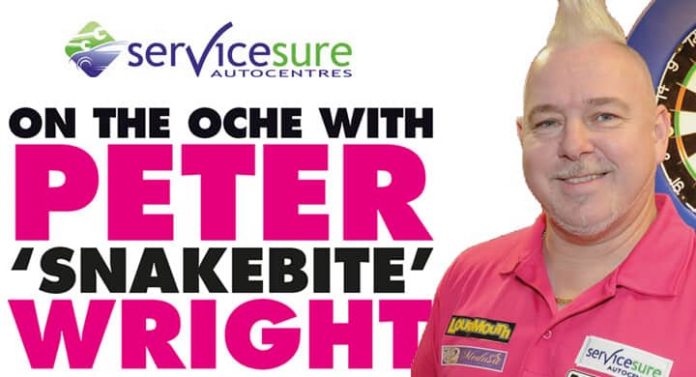 In March this year, Servicesure took its first steps into professional sport sponsorship, with current world number three darts player Peter Wright. Here we catch up with Peter in an exclusive interview with the new Servicesure Autocentres ambassador.

You’ve had a great start to 2017. What has been the secret and what are your hopes for the rest of the year?
It has been a good start to 2017 and it’s fantastic that it’s coincided with me starting to work alongside Servicesure. At the time of this interview, I’ve won seven tournaments so far this year, including my first TV title in the UK Open, and I’m at finals night in the Premier League. I think a lot of it is down to confidence and hard work. I put the hours in on the practice board and I believe that, on my day, I’m capable of beating anyone. It won’t always happen but you have to have the belief and I’ve got that. As for the rest of the year, I just want to keep playing well and winning titles. Obviously the television events are the ones we all love to win but winning on the Pro Tour or the European Tour is also a fantastic feeling.

How proud are you to be sponsored by Servicesure?
I’m extremely proud. I visited the head office in Solihull at the end of March for an official launch which was a great afternoon. It was a good, fun environment and it felt like a fantastic place to work. I know that there are an increasing number of garages signing up to the Servicesure programme and it’s well
over 400 now around the UK. Servicesure is on the march and I’d like to think I am in the darts world too. Hopefully we can rise to the top together and this can be a long and successful partnership for all parties. I’m certainly proud to have the logo on my shirt at all the big tournaments duringthe rest of this year.

You are commonly known around the darts circuit as Peter ‘Snakebite’ Wright. Where did the nickname come from?
This is a nice easy one. I just like snakes as pets! The name was mentioned to me a good few years back and it has just stuck. The darts fans seem to like it and I’m happy with it so it’s all good.

When did you first realise you were good at darts?
I first started throwing darts when I was 10 and it’s just gone on from there. To be honest though, I don’t think I am that good yet! I know what I’m capable of and I still feel there is a lot more to come.

When you first started out, did you ever hustle in a pub?
I did hustle in a pub in London when I was 16 and the reaction wasn’t good. I learned my lesson that day so I haven’t done it since!

How do you prepare for a big match?
It’s quite a long process because I have to get my practice in but also I have to have my hair done. It can take up to four hours but my wife Jo does that and she is absolutely brilliant and a great support.

Who is your toughest opponent in darts?
That’s a difficult one because there are so many good players. I would have to say that Simon Whitlock is one of the toughest players to beat. He is a great but he has also got that Aussie grit which means he never knows when he is beaten.

If you weren’t one of the best professional darters in the world, what would be your occupation?
A tyre fitter.

Given you are backed by Servicesure, what would be your dream car?
Lamborghini.

And finally, what advice would you give aspiring young darts players looking to be successful in the sport?
Be dedicated and believe in yourself. There are so many quality darts players out there now that hard work is the only way you are going to make it to, and stay at, the top. Put the hours in on the practice board and the rewards will come.