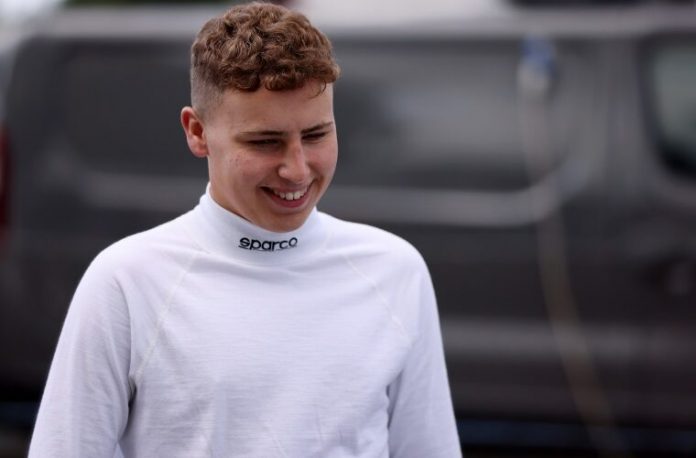 Ginetta GT4 SuperCup championship hotshot, Aston Millar continued to pile on the pressure and narrowly missed what looked set to be a win after a red flag interrupted progress at the Knockhill round over the weekend of July 30-31.

Speaking of the incident, Millar said: “Having closed the gap to Kellett I think you could tell he was getting worried. I feel he was pushing really hard to try stay in front and I just sat behind him and kept putting pressure on him. This resulted in an unforced error by him in the last race that saw him disqualified from the race.”

The disruption followed impressive progress across the weekend. Race 1 was a close-fought battle, with Millar harrying Kellet from the start, ending with Millar in P2.

Millar was quick off the line for Race 2 and once again mounting pressure on Kellet until the safety car made an appearance and red flags donned the track. The race concluded with another P2 finish for Millar behind Kellet.

A reverse grid for race 3 put Millar’s start at P3 and Kellet’s at P4.

The red flags returned early-on but a restart saw Emson, Millar and Kellet get past a slow start from Dawes on pole.

A mechanical failure for Emson put Millar at the front with Kellet just behind.

Skillfully holding him off, Millar was maintaining his position when the safety car returned for the recovery of Emson.

Following a restart, Kellet headed into Taylor’s Hairpin where he lunged up the inside of Millar, taking him out of the race. Judged to be a professional foul, it proved to be a manoeuvre that resulted in Kellet’s disqualification.

Afterwards Brett Earp, marketing director for GSF Car Parts said: “What a weekend Knockhill turned out to be. It was an exhilarating performance and despite the weekend’s frustrations, Millar continues to show real promise. We’re confident he’ll soon get that much-deserved win.”

The next round of the Ginetta GT4 SuperCup championship is at Snetterton over the weekend of 13-14 August.

Looking ahead, Millar added: “Going into Snetterton, I think we can show more progression and get past the others to get this win. After the last race it is great to see how many people are on my side and I’m sure we are almost there.”