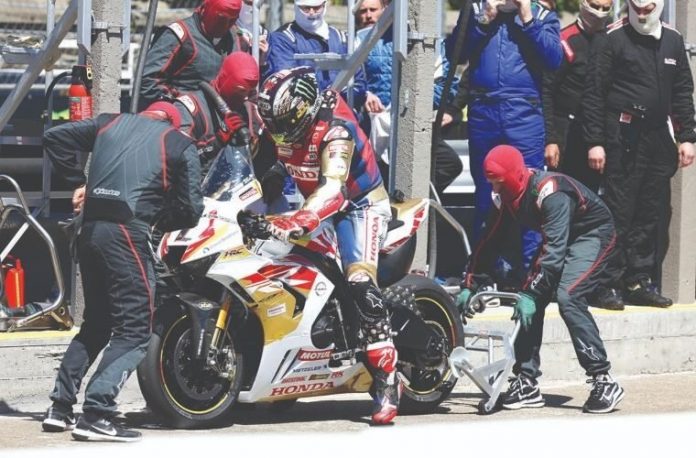 Motorcycling legend John McGuinness – who is sponsored by ignition and sensor specialist NGK – celebrated his 100th start at the Isle of Man TT Races with a fine fifth place in the six-lap RST Superbike race.

The 23-time winner returned to the top five in a 1000cc race for the first time since 2016 as he appeared back with Honda Racing on the island for the first time in six years on the Honda Fireblade with which he’d enjoyed so much success in the past.

After a successful week of qualifying put him in a good position ahead of the opening race, a solid opening lap of 128.43mph saw McGuinness slot into tenth place and he was then able to increase his pace and steadily work his way up the leaderboard.

A second lap of 129.27mph enabled him to gain three places and climb up to seventh and that soon became fourth after a fine pit stop by his crew at the end of the lap.

However, only 13s covered McGuinness in fourth to seventh placed James Hillier with regular sparring partner Ian Hutchinson and Jamie Coward sandwiched in between.

A fourth lap of 129.14mph meant McGuinness’s advantage over Hutchinson was just 3.5s and with the Bingley rider having a quicker sixth and final lap, he was able to overhaul McGuinness who held on for fifth place.

Commenting on the BikeSport website, McGuinness said: “Did I think I’d win it? No. Did I enjoy it? Yes.

“And after having some dark days in the past, never did I think I’d be doing this again, setting off at number 1 on the Honda Fireblade and running round the Mountain Course at close to 130mph.”

Mark Hallam, Marketing Manager, NGK Spark Plugs (UK) Ltd, said: “It was an incredible achievement by John on his return to the TT taking into account his time off the bike.

“I’m sure his many fans were thrilled at seeing him back in action at the iconic event where he has achieved so much success.”

NGK has long been synonymous with the two-wheel bike scene both on the road and in the motorcycling racing arena where its spark plugs have helped the world’s leading teams and riders to numerous victories.

It is the world’s number one original equipment (OE) fitment and its Iridium IX spark plugs are popular with motorcyclists for their ability to provide enhanced ignition efficiency, better acceleration, faster starting and smoother running, longer life, and better fuel consumption.