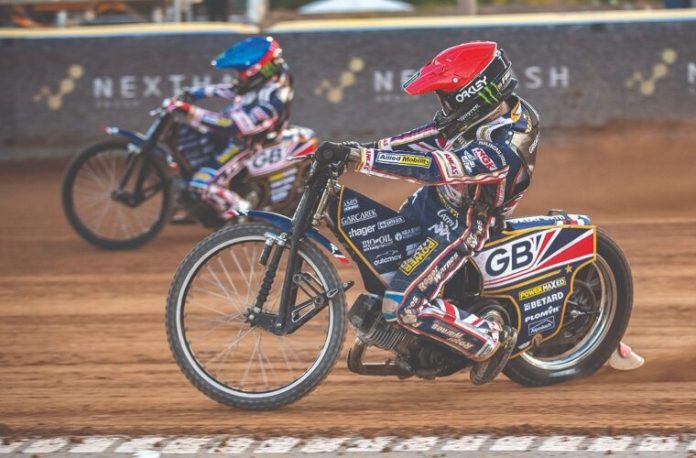 The Great Britain team all individually sponsored by NGK

Sweden, led by Freddie Lindgren who is sponsored by NGK in the World Championship Grand Prix series, won the second semi-final from the Czech Republic and holders Great Britain who pipped France to take the third qualifying spot in Vojens, Denmark.

Semi-final 1 top three Australia, Finland and Poland complete a fantastic field alongside hosts Denmark for the final which will be shown live on Saturday on Eurosport 2.

Defending champions Great Britain finished fourth on the score chart with 31 points but snatched the last place in the final after overcoming a tense final qualifier with France, who scored 32 over 21 heats.

A stellar start by Great Britain’s three-time World Champion Tai Woffinden saw him hit the front in the race-off, with teammate Dan Bewley rounding him for a GB 7-2. Woffinden starred on 19 points with Bewley and Robert Lambert picking up six each.

Woffinden insists Great Britain was only focused on securing qualification – not winning the semi-final – but he was grateful to have been handed the favourable inside gates by France, who had first choice of starting positions for the race.

He said: “The goal for today was to qualify for Saturday. It didn’t matter which position we made it in – Saturday is a new day.

“The French gave us the better gates, so ‘merci beaucoup!’ We’re in the final.”

The Great Britain team members all feature the NGK logo on both their upper arms and the logo is also displayed on the right side of the Team GB bikes, all of which are fitted with NGK’s racing spark plugs.

John Money, who handles Speedway sponsorship on behalf of NGK Spark Plugs (UK) Ltd, said: “I am sure the Great Britain team will put the semi-final behind them and go all out for victory on Saturday to retain the title they fought so hard to win in the UK last year.”