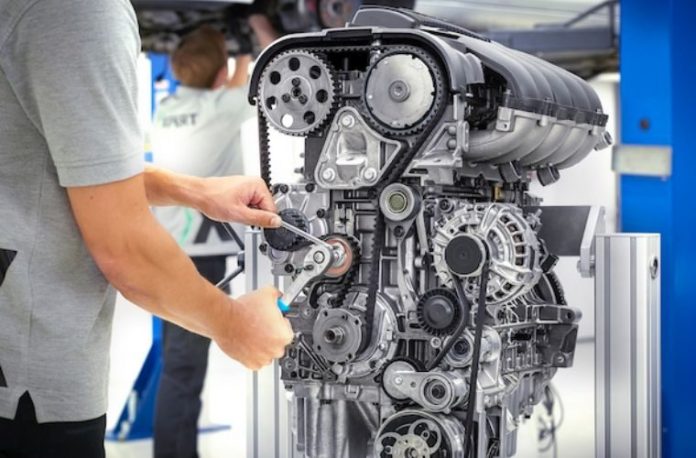 Both videos are short and to the point, but still contain all the critical instructions and specifications needed to carry out a professional replacement.

One of the most common causes of premature belt system failure on 1.9 and 2.0 TDI engines is the incorrect replacement of the tensioner stud.

The stud is steel, whilst the cylinder head to which it attaches is alloy, which can create issues.

Extreme care needs to be taken to ensure there is no damage to the stud hole or thread, and any aluminium deposits are removed so that the stud can be fully inserted.

If the stud extends too far from the block, it can act in a similar way to when you ‘twang’ a ruler on the side of a desk – the more it protrudes the more vibration is created.

Also, if the stud is not installed absolutely square to the engine block, the tensioner will be misaligned, causing excess friction, vibration and premature failure.

The tensioner stud replacement video shows how both the installation angle and depth of the stud can be easily checked by using the INA stud tool available from the REPXPERT bonus shop.

Technicians using the tool to confirm the accuracy of the stud installation can then move on to the tensioner itself, which also needs to be fitted with extreme care.

The tensioner setup video highlights the fact that there are two interchangeable tensioners originally fitted by VAG to 2.0 TDI engines, but that the installation procedure is slightly different depending on the manufacturer – Litens or INA.

Currently, some data providers are only showing the setup procedure for the OE Litens unit, but as both of the popular INA timing belt kit options listed for the engine obviously contain an OE INA tensioner, following the correct INA setup instructions is critical.

The video demonstrates clearly and in detail, the procedure and specifications that must be followed when fitting the OE INA tensioner which, when combined with an accurate stud installation, will ensure a professional and reliable replacement of the entire timing belt system.

Information on Schaeffler products and systems, fitting instructions, labour times and much more can be found on the REPXPERT workshop portal or by using the REPXPERT app, which is available free for all iOS and Android devices from the relevant app store.