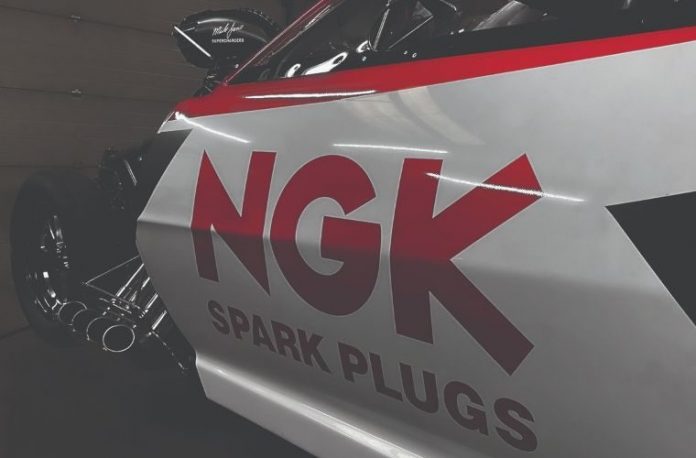 NGK-sponsored seven-times UK pro mod champion Andy Robinson is set to return to the drag racing scene next month with a completely new look for his ’69 Camaro race car.

Andy is set to debut the NGK-liveried ‘Anger Management 2.0’ at The Doorslammers meeting on September 3-5 at Northamptonshire’s Santa Pod Raceway, the scene of his spectacular crash.

Ignition and sensor specialistNGK Spark Plugs (UK) Ltd and Andy’s company, Robinson Race Cars, have a long-established relationship spanning more than ten years and the arrival of the new pro mod dragster will mark an even closer bond between the two.

Andy said: “It’s been a long journey getting Anger Management 2.0 ready for racing. It looks great and I can‘t wait to debut it in front of our fans at Santa Pod.“

The building of this new race car was prompted by the 200mph accident in the 2018 National Finals at the Santa Pod Raceway.

So bad was the damage inflicted by the high speed crash that the team were left with no choice but to write off the original race car, known as ‘Anger Management’.

Fortunately Andy, driver and owner of the race team, walked away shaken but otherwise unhurt, testament to the team‘s acknowledged excellence in chassis and roll cage design and fabrication.

The accident came at the end of a season that had seen the team continually raise the performance bar, culminating in a record breaking run of 5.867 seconds and a top speed of 246.37mph for the quarter mile.

Andy later reflected: “It was such a shame because the car was getting faster and faster. Earlier in the year we had set our best time ever, setting a track record in the process.

“We were looking forward to going faster still in 2019 with two goals in sight, breaking the 250mph barrier and setting a 5.7 seconds time, and the way we were developing the car I think we could have done it.”

However within days of the accident the team promised a comeback and started to plan the build of Anger Management 2.0, a car that they vowed would be even faster than its predecessor, but in saying so they knew that no small task faced them and it was a project that couldn’t be rushed.

Mark Hallam, marketing manager, NGK Spark Plugs (UK) Ltd, said: “With a relationship that spans more than ten years we told Andy we would stand by the team for as long as it takes to build the new car.

“When Andy came to us with his new design proposals we were thrilled to see how he’d integrated NGK into the overall design. Now we can’t wait to see if it’s as quick as it looks.”

While Andy‘s car was out of action NGK set him another challenge in the shape of its MO70 Dragmower project.

The original ride-on mower, on which MO70 was based, was transformed by Andy and was piloted by NGK Sales Representative John Catterson at Santa Pod in October 2019 when it reached 115.53mph in just 9.49 seconds, believed to be a record for a ride-on mower over the quarter-mile distance.

Andy values his long-term relationship with NGK. He said: “We’ve always felt very privileged to have a name like NGK behind us and it seems absolutely right that ten years on we celebrate that relationship by having NGK featured so prominently on our new car.

“Now it’s down to us to deliver. No pressure then.”