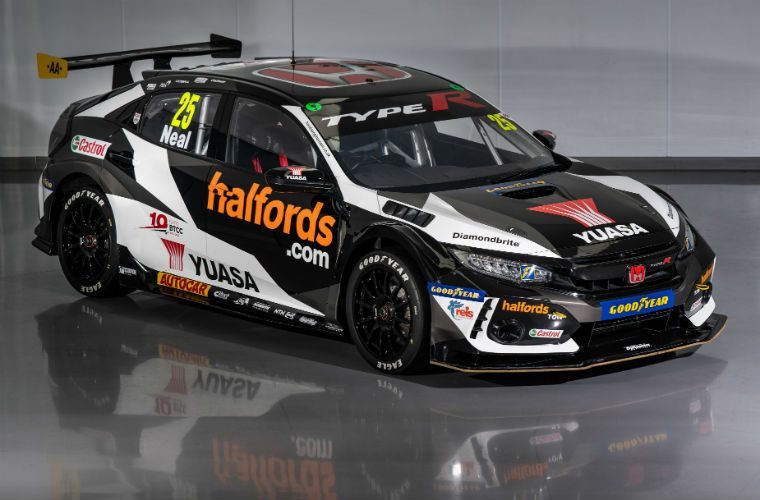 Yuasa is celebrating its ten-year anniversary in the British Touring Car Championship with the launch of its 2020 challenger.

Launched at Team Dynamics headquarters in Droitwich, Worcestershire, the 2020 Honda Civic Type R FK8 has seen significant development over its predecessor as the team fights to become champions once again.

The launch marks Yuasa’s ten-year anniversary with the team, having first become sponsors in 2010.

To commemorate the battery manufacturer’s decennary, a special 10-year anniversary logo is also featured on the car’s side.

Fans were able to get a glimpse of the new livery in person when the cars hit the track for pre-season testing at Silverstone.

The cars were piloted by three-time champion Matt Neal and Dan Cammish during the pre-season testing which took place at Silverstone on Tuesday 17 March.

In that time, he has secured 63 race wins and three drivers’ championships.

The Droitwich-based team hope to build on the Honda Civic FK8’s successes over the last two seasons.

The Team Dynamics-run Halfords Yuasa Racing team scored podiums at 18 races in 2019, securing the team’s championship, but narrowly missed out on becoming drivers’ champions at an action-packed season finale at Brands Hatch.

James Hylton, managing director at GS Yuasa Battery Sales UK Ltd said: “Yuasa are the UK’s number one choice for automotive and motorcycle batteries and our performance on track over the last ten years have strongly reflected our core values of quality, reliability and performance.”

Matt Neal, Halfords Yuasa Racing Driver said: “Not only have Yuasa been our longest serving sponsorship partner, but they have truly embraced the meaning of the partnership from our humble beginnings together back in 2010.

“I cannot thank them enough for the help and support they have given the team and I over the years, through the good times and the bad, they have stood by our side.

“I am very proud to be associated with the Yuasa brand and the great team of people that are behind it and its products.”

Yuasa has a long and proud heritage in the BTCC, sponsoring the Honda works team in 2010 before becoming a title sponsor a year later.

During this time, the world’s leading battery manufacturer has enjoyed phenomenal success on the track, claiming an unprecedented four manufacturers titles and four drivers’ championships.

The 30-round championship starts at Donington Park at the end of March before visiting some of the UK’s most famous circuits including Knockhill, Snetterton and Thruxton.

The season finale takes place at Brands Hatch in October.