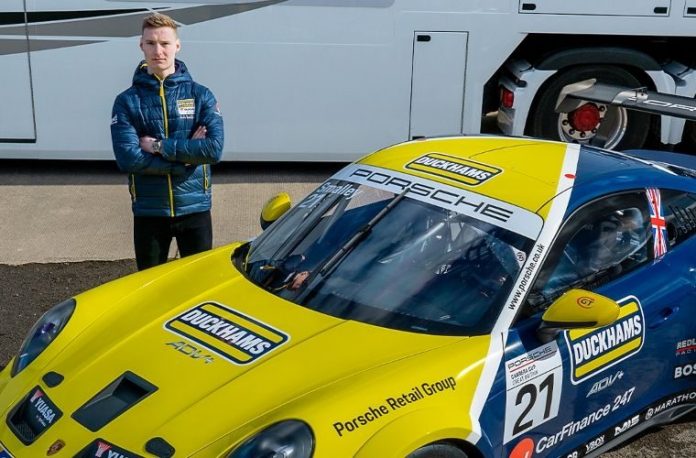 GS Yuasa have announced that their Yuasa battery brand, the UK market leader for automotive batteries, are to continue in the fast-paced Porsche Carrera Cup GB as joint title sponsor of Duckhams Yuasa Racing.

The announcement coincides with the team unveiling the livery of its brand-new Porsche 911 GT3 Cup and finalising their 2022 line-up with multiple race and title winner Oliver White joining the team alongside Adam Smalley.

After securing the overall crown with record-breaking three-time champion Dan Cammish last year, the Redline Racing outfit will expand, becoming a two-car entry with Yuasa coming on board as joint title sponsor.

Oliver, a 29-year-old from Bath, has spent the past nine years racing very different machinery with a whole host of successes in Formula Ford, taking three Champion of Brands titles, winning the 2020 Walter Hayes Trophy, impressing at the Formula Ford Festival, and even scoring a hat-trick of wins at the legendary Mount Panorama circuit in Bathurst, Australia.

Duckhams Yuasa Racing with Redline drivers Oliver and Adam will compete alongside fellow confirmed Redline Racing entrants Micah Stanley and Nathan Harrison for a formidable entry into the series this season.

The Porsche Carrera Cup GB opens a new era in 2022 as it introduces the 992-style 911 GT3 Cup car, which features increased power and downforce, raising the performance of the UK’s fastest one-make series to a new level.

Building on the success we celebrated with the team following Dan Cammish’s record-breaking third championship was a moment we’ll never forget and it’s safe to say we’re looking forward to another season of high-octane action.”

“I aim to seize it with both hands and make the most of it. I know it’s going to be a steep learning curve, but I am ready for the challenge.

“I wouldn’t look beyond Redline Racing as the team is the benchmark in the Carrera Cup.

“They have won loads of championships, the mechanics are all brilliant, I get on well with Simon, and if I am going to do well anywhere, it’s with Redline Racing.”

Programme Manager, Chris Hodgen said: “Oliver was actually the inspiration behind looking to increase our involvement to two cars this season.

“Last year we brought Duckhams back to motorsport sponsorship with Dan Cammish, and it was a great year taking home the title.

“However, after the great news that Dan is returning to the BTCC, I wanted to give two new drivers the opportunity of a lifetime with Duckhams and Yuasa.

“The winter has been really busy building up a solid portfolio of partners to support our initiative.

“Oliver is also blisteringly quick and a great guy to boot, so both he and Adam deserve this opportunity to shine on the main stage and will be great team-mates and brand ambassadors for our partners.”