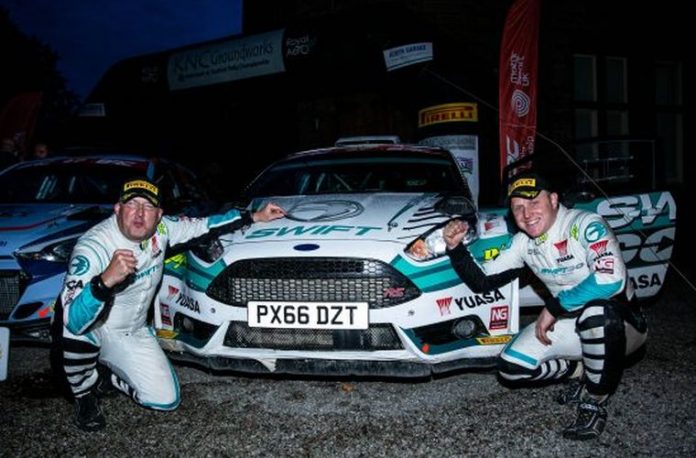 After a ding-dong battle all season with sparring partner Tom Cave, Edwards and co-driver Patrick Walsh were crowned the 2019 champions after a stellar campaign in Britain’s premier rallying series.

Billed as the ‘Run to the Hills’ the pulsating British Rally Championship season finale was to be set in south Scotland, with the heavyweight title decider a tantalising prospect for the thousands of spectators lining the stages.

Matt Edwards came into the showdown only needing a seventh-place finish or better to become the first double champion since Keith Cronin in 2009/2010.

Packing his Yuasa-supported Ford Fiesta R5 with a raft of spares, the M-Sport star set-off into the eight-stage event, just looking to finish.

Title rival Tom Cave and his co-driver Dale Bowen had to win to bring himself into contention.

Cave and Bowen blitzed the event and won all eight stages in their Michelin-shod Hyundai i20 R5.

Cave may have won the battle in Scotland, but Edwards won the war – threading his way through the gravel tests to bring his Fiesta into third overall – enough to seal him his second domestic title.

Matt Edwards said:“I went into the last stage just wanting it to be over and it was a tough event for us to drive, as we had to make sure we got to that finish line.

“M-Sport, Patrick [Walsh] and the whole team have made it all perfect for me and to have everything come together again is really sweet.

“I hope Tom [Cave] takes it as a compliment, but to beat him this year is really special and to enjoy this season long fight was great for the championship and to beat him on pace, I am really chuffed. It’s just unbelievable!”

Tom Cave said: “We had a really good day in the car, clean sweep of stage wins and we came out fighting which is what we had to do to try and win the championship and take the fight to Matt.

“Congratulations to him and Patrick, but we did all we could today and Dale [Bowen] did a fantastic job.

“I have had too many bridesmaid moments and naturally we are gutted but to round out the year with a win is a great feeling, especially in some great stages up here in Scotland and it’s been a very enjoyable.”