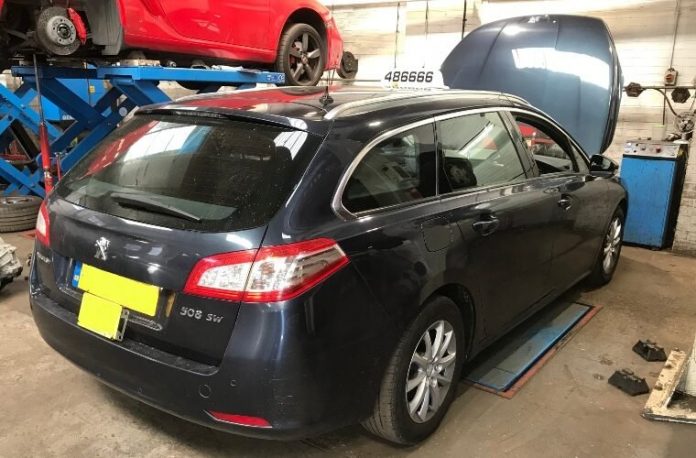 In this month’s LUK clutch feature from Schaeffler, REPXPERT Alistair Mason is replacing a clutch and dual mass flywheel on a Peugeot 508 SW powered by the 1.6 HDI engine with more than 170,000 miles on the clock.

The customer has reported that the clutch is starting to slip and this was confirmed with a short road test.

The customer was advised to replace the clutch and dual mass flywheel as part of the repair and authorisation was given.

The Peugeot 508 shares the same platform as the Citroën C5, it has proved to be a popular car on the UK roads with a combined vehicle parc of over 50,000 cars, so there is always an opportunity for repairs to be carried out.

On initial inspection, the gearbox looks hard to access and even harder to remove, but with some of the larger components removed the repair becomes quite straight forward.

The scheduled time for this repair is six hours, so with some guidance, this should make for a profitable repair in any independent workshop.

First remove the engine and gearbox undertrays, the plastic shield under the front bumper, both front wheels and front wheel arch liners.

You’ll also need to remove the front bumper fixings, electrical multiplugs inside the front wings and then the front hub nuts too.

You’ll then be able to remove the clutch slave cylinder (leaving the hydraulics connected), disconnect the gear change cables and remove the starter motor.

A good tip here is to secure the radiator at the top to the front panel using cable ties to prevent the radiator dropping when the front subframes are removed.

Raise the vehicle lift to gain access to the underside and drain the cooling by removing the bottom hose.

While the coolant is draining, lower the lift to waist height and remove the front crash bar.

Once the coolant has drained, raise the lift and remove the front aluminium sub-frame assembly (figure three) by removing the two bolts in the front and four holding the rear to the main sub-frame.

Now remove the main front sub-frame, firstly disconnect the brackets holding the power steering pipe to the subframe and ensure it is free.

Support the front subframe using a transmission jack and remove the four bolts that hold the subframe.

Carefully lower the subframe, once clear lift clear of the vehicle and stow in a safe area (figure four).

Now drain the gearbox oil and remove both driveshafts from the vehicle – the O/S/F driveshaft also has a centre bearing that needs to be released.

Now remove the bell housing bolts but leave one accessible bolt in position to support the gearbox until we reach the removal point.

Support the engine using either an engine brace or a support stand under the engine and the remove the top gearbox mounting.

Once removed support the gearbox with a transmission jack, lower the engine and gearbox, remove the final bell housing bolt and ease the gearbox away from the engine.

Once clear, lower the transmission jack and remove the gearbox from the vehicle.

At this point it was clear to see that the clutch had reached the end of its service life as the self-adjusting clutch springs were fully extended (figure six).

Check the back of the engine for any oil or coolant leaks and rectify if required.

Clean the back of the engine with brake and clutch dust cleaner and compare the new dual mass flywheel with the old one to ensure it is correct.

The bell housing was cleaned out with brake and clutch dust cleaner.

You’ll need to place a light smear of high melting point onto the gearbox input shaft splines and then mount the clutch plate onto the input shaft.

This will confirm the clutch plate is correct for the vehicle and also evenly distribute the grease.

Remove the clutch plate and wipe off any excess grease.

Using a clutch alignment tool, or even better a self-adjusting clutch mounting tool, mount the clutch ensuring ‘gearbox side’ (or ‘getriebe seite’, which is etched into the clutch plate centre) is facing the gearbox, then tighten and torque the bolts in an even and sequential manner.

Check the engine to gearbox alignment dowels are located correctly, now install the gearbox using the transmission jack and ease the gearbox into position and locate on the dowels.

Secure in position using an easily accessible bolt and then refit all components in reverse order of removal, remembering to replace the gearbox oil.

Once the battery has been installed, ensure all electrical systems are reset and finally road test the vehicle to ensure a successful repair.

Information on Schaeffler products, fitting instructions, repair times and much more can be found on the REPXPERT garage portal.

Servicesure extends warranty programme with ‘Oilsure’ in conjunction with Comma 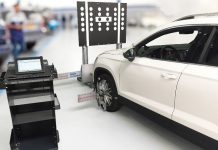